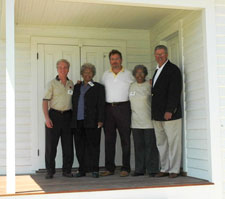 Currituck county. They learned that a newly formed group called "Saving African American Heritage" had been formed under the auspices of N.C. Department of Cultural Resources Division of Archives and History. A volunteer from the church attended the first conferenceof this organization on March 7, 1998, in Durham, N.C.

A report was brought back to the church and a committee of volunteers was formed to investigate the restoration of the Old Jarvisburg Colored School. On July 14, 1998, the group met with a representative of N.C. Department of Cultural Resources for a site inspection and professional information pertaining to the feasibility of the project. The group of volunteers were inspired to go forward.

They soon realized that this building was one of the oldest standing former colored schools in the state, and that they would need the support of all the members the community. Their efforts became known as the "Historic Jarvisburg Colored School." In 2002 an official organization took shape to restore this historic landmark and tell its story to the community. 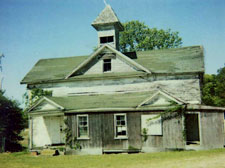 Some community leaders at that time could only visualize turning this old historic building into a Masonic Meeting Place. Others remembered that Corinth Church had sacrificed to buy the building from the county in 1950 and talked about ways to use the building for the benefit of the whole community.

In 1972 the Cultural Resources Division of the North Carolina Department of Cultural Resources conducted a site survey of potential historical properties in Currituck County. This survey named the Old Jarvisburg Colored School as a possible historical site worthy of statewide recognition. 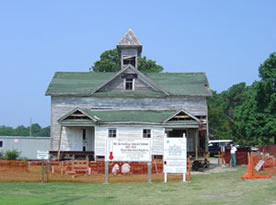 The HJCS Board approached the Currituck County Commissioners for their help in stabilizing the school building in 2003. The building was showing many signs of neglect; repairs were urgently needed. With the significant history of the building, and the desire to preserve its historical heritage, the County Commissioners commissioned a feasibility study. The results of this study proved the worthiness of this project as being viable and important to the county. Work was authorized by the commissioners to stabilize the building’s exterior, and to restore it to its early condition.

The architectural firm of Rodriguez, Ripley, Maddux and Motley was given the project of restoration. Architect Joseph Freeman guided all parties in the process. During this phase, the HJCS board was notified that its efforts to have the building placed on the National Register of Historic Places would be put on hold until the interior of the building was also restored. The HJCS board would also have to provide documentation for all original materials that were re-used in the building.

The board was thrilled when a wonderful gift of old cypress timbers was received; the cypress matched the cypress used in the school building. The gift of cypress boards came from a farm building built by slaves prior to the 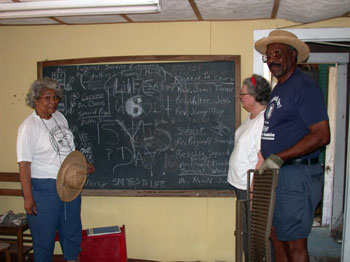 Civil War. The old building also gave up a few hidden treasures from years gone by.

In 2006 the Currituck Commissioners were again asked to help and they did. They approved additional funding to allow for the restoration of the building’s interior, and for the construction of a visitor facility.

The Historic Jarvisburg Colored School will tell new stories as a Museum. The HJCS Board realized early on in its development that in addition to preserving this historic school building, it had a bigger role to preserve and share with the public the history of education of the colored children during this timeframe of the late 1860s through integration. 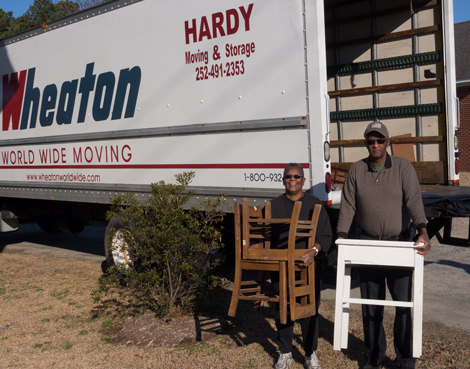 HJCS Board members Sarah Banks and Leon Saunders help unload school building furniture stored since 2003 by Hardy Moving and Storage.
It was an exciting day to bring back home furniture removed from the old HJCS School building in 2003. The building at that time was in disrepair and marked the beginning of a long journey of restoration and rebuilding to earn its placement on the National Register of Historic Places.

Vivian Simpson, Vice President of HJCS, remarked, “ We can’t thank Charles Hardy enough for his outstanding support shown to this effort by helping us remove and store all the furniture from the building these past 11 years. I don’t think anyone anticipated that it would take this long to reach this day. We knew the furniture was in good hands and we are excited to move ahead with plans for the Museum exhibits.”

Furniture returned included some pieces used by the Sandy Ridge Masonic Lodge and other pieces left in the building before it became too unsafe to continue using it. The HJCS school will re-open later this year as a Museum to share many stories about the history, culture and education of African American children in Currituck County, beginning in 1867 and continuing up to the consolidation of all the small rural schools in the 1950’s.